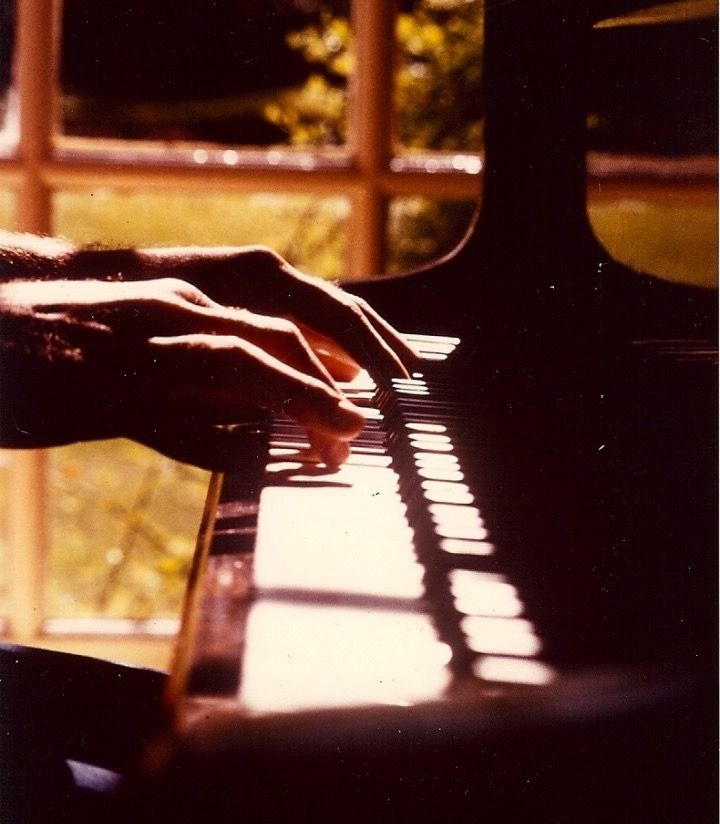 Those are my hands over the keys at the grand piano that stood in the parlor of the dorm I lived in when I attended Edinburgh University in the summer of 1985. My friend Ronny took the picture. By then, I was a pretty good self-taught piano player—self-taught because no one in my family thought giving me lessons would have been worthwhile. My grandmother was the one who got me started. When I was in grade school, she taught me how to play the C major scale on the Steinway upright piano she had in her apartment; and I think she may also have taught me how to read whole notes, half notes, and quarter notes. From that moment on, I wanted to be a musician and, from that moment on, everyone in my family did everything they could to discourage me.

My mother and stepfather did not allow me to join the orchestra in the elementary school I attended; and, as I got older, my grandmother made sure I understood not only that I would never make a living at it, but that there was no way I could ever be good enough. “You started too late,” she told me. “To be a concert pianist, you need to begin formal lessons while you’re still a young child.” I didn’t know this at the time, but she had sung professionally when she was younger, on the radio (though I don’t remember the name of the program), and, if I remember the story I’ve heard correctly, Jimmy Durante was at one point her accompanist.

When I was in high school, I joined the local drum & bugle corps. I don’t know why my mother didn’t stop me—my stepfather was gone by then—but she didn’t. I wanted to be a drummer, but the corps needed horn players, so I ended up playing the bass baritone bugle. I got be pretty good at it too, but the hours I spent practicing drove my mother, and my neighbors, a little bit crazy. For a while I thought I might stick with drum corps, which is a pretty big deal once you get past a certain level, but that didn’t work out, and so making music was something I did pretty much only at my grandmother’s on that same Steinway upright—the original sales receipt for which my mother gave me recently so I could take, as she put it, “a trip down memory lane:” 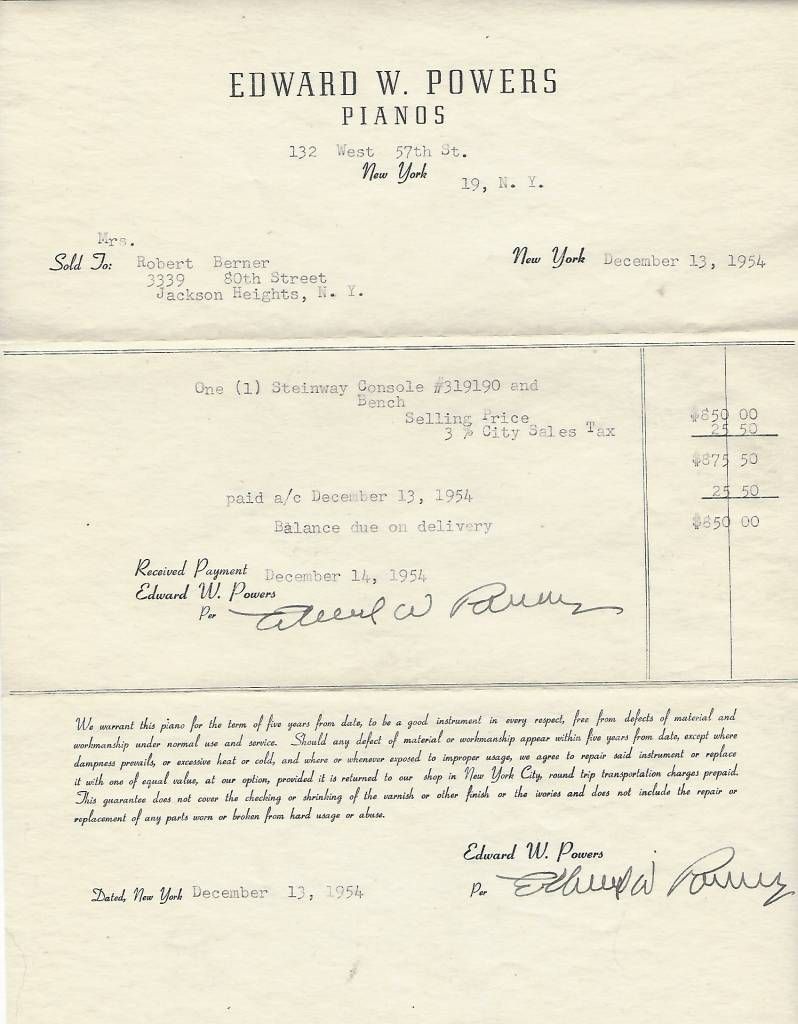 All that playing at my grandmother’s must have done me some good, because when I finally had the chance to take piano lessons, a semester’s worth during my senior year of high school with a teacher named, I think, Ms. Wise (or Weiss), I was good enough to take a stab at Ernesto Lecuona’s Malaguena: 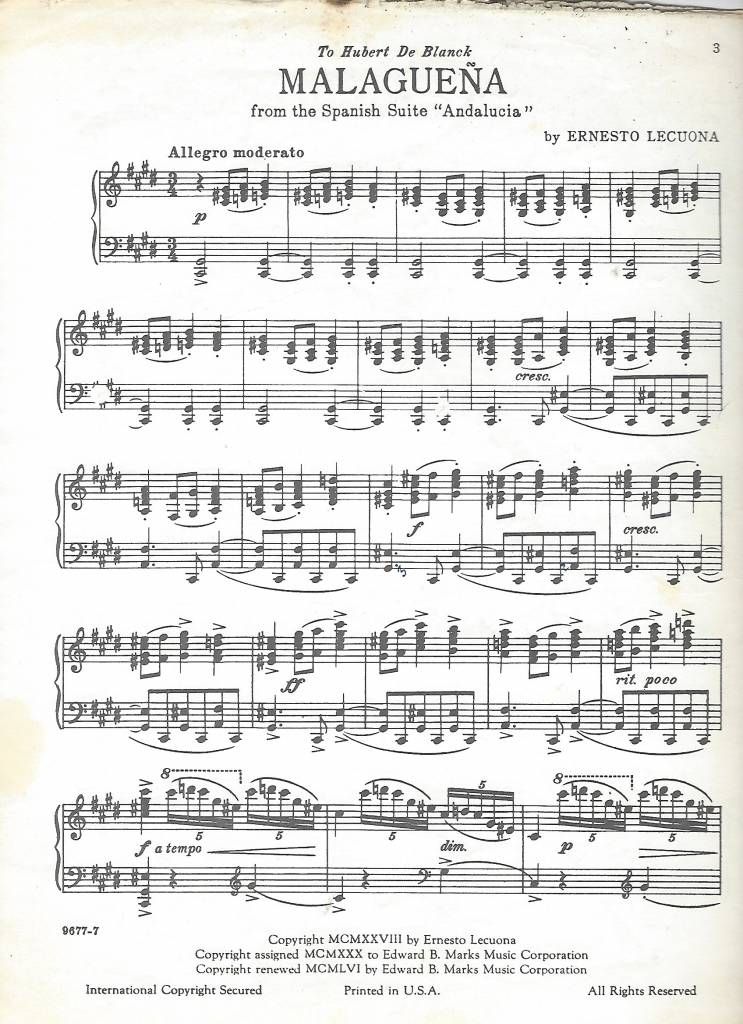 It’s a beautiful piece of music, well-worth listening to, if you have a few minutes:

By the time I started college, I was already beginning to think I’d be a writer, not a musician, so when I played piano—which I did for hours each week in the practice rooms at Stony Brook University—I did so only for myself. I never tried to learn any actual songs, though, preferring the improvised music I made based on what I’d learned in the couple of music theory courses I took, until I started working at Surprise Lake Camp and got involved with the drama program. I learned there to fake my way as accompanist through the music of Cats, A Chorus Line, Fiddler on the Roof and more. Then, I met my friend Bill, who had ambitions to become a singer-songwriter, and we started writing music together. We even performed once at The Bitter End, though whoever did the publicity spelled my name wrong: 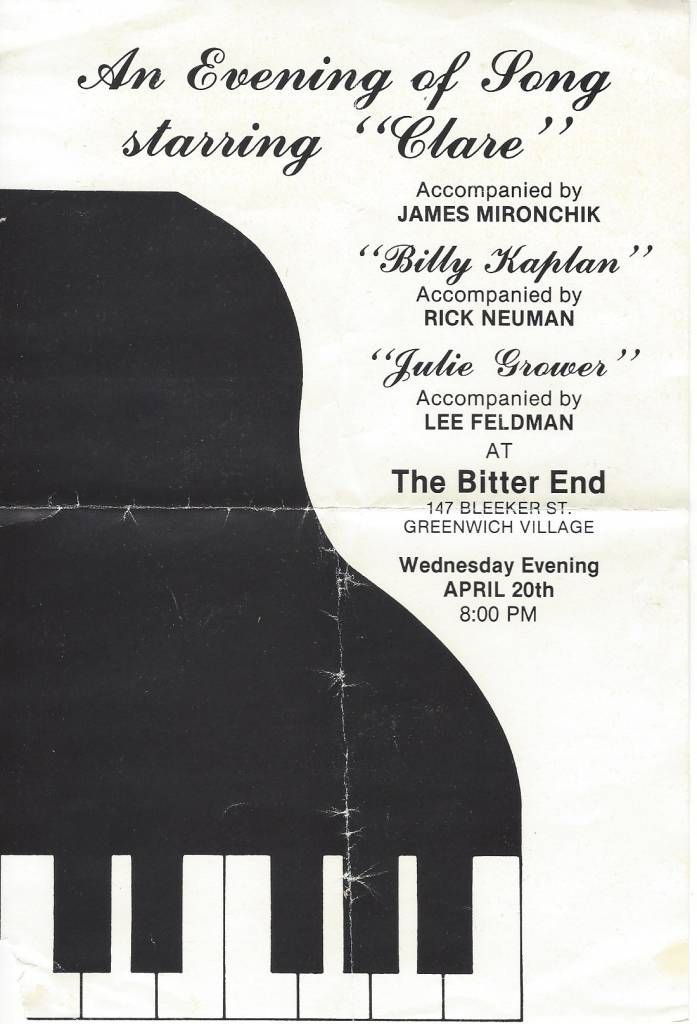 When my friendship with Bill ended, maybe because it ended—we did not part on good terms and I was angry and devastated by the loss—I lost the desire to perform on stage. I was getting serious about my writing and I made a conscious decision to focus my energies there. I still played for my own enjoyment, and sometimes I’d play for friends at a party, but I no longer thought of music as something I wanted to pursue seriously. That changed, for a time anyway, when I discovered how easy it was to compose music with a MIDI synthesizer, a computer, and the right software. I might not have wanted to perform in front of an audience, but the idea of writing music appealed to me. So I bought the equipment I needed and got started. Over the next three or four years, I composed fifteen or so pieces that I thought of as complete, but the five in this Soundcloud playlist are the only ones that survive. I found them on my computer not too long ago and I liked them well enough that I thought them worth preserving and sharing with others.

Richard J Newman · My music from the early 1990s

These days, I don’t play much piano at all. I’ve never been one for New Year’s resolutions, but I miss it. I really do. Maybe enough that I’ll start again in 2021. 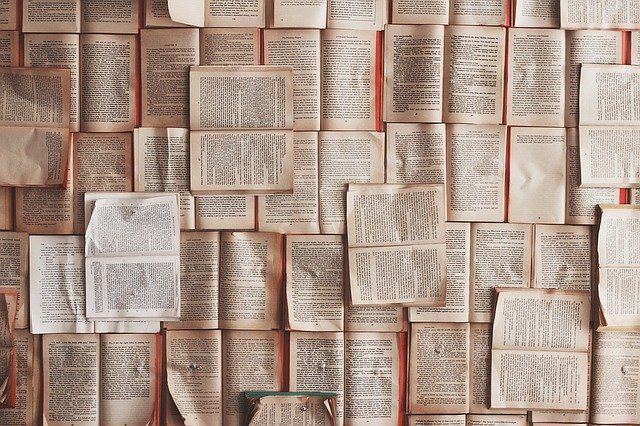 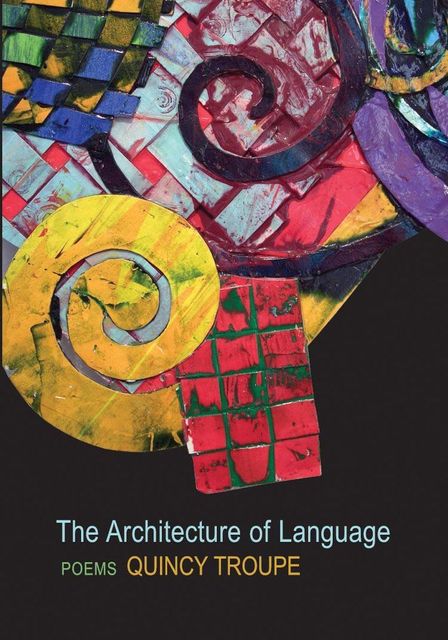 Craft Talk 3: Quincy Troupe’s Rhythm
Latest posts Being A Woman Is Not A Punishment: What’s At Stake For Men In The Policing Of Women’s Bodies A Gratitude In Me That I Did Not Fully Appreciate At The Time Three Poems Of Mine That Should Never Have Become As Relevant As They Are Now Deciding whether something should be a poem or an essay An Essay That Took Me More Than Thirty Years To Write Has Been Published! A Provocation: Christianness (Not Christianity) Is To Jews And The People Of Other Non-Christian Religions As Whiteness Is To People Of Color from “The Necessity to Speak,” by Sam Hamill Reading Mark Nowak’s “Social Poetics:” Thinking About The First Tuesdays Cento and A ‘Flipped Script’ Poetry Reading My Year Long Writing Project What Writers Have Influenced Your Work? What I’ve Been Thinking About Ukraine When Did You Start Writing? My Pandemic Reading List Thirteen Thoughts About Palestine, Israel, and Antisemitism Craft Talk 3: Quincy Troupe’s Rhythm The Music I’d Like to Put Back Into My Life The Way Academia Is Supposed To Work Publication News: Three New Poems in Two Lovely Publications Medical Culture and Its Effects on Doctors and Patients Antisemitism Has Always Been a Part of My Life - 1 My Response to The Erasure of Antisemitism in Namrata Poddar’s Article in the Recent Issue of Poets & Writers Lines That Didn’t Make The Cut: Sometimes It’s Just a Big Mess from “The Lines That Antisemitism and Racism Draw” Reading “The Veil and The Male Elite: A Feminist Interpretation of Women’s Rights in Islam,” by Fatima Mernissi Commonplace Question #2: Are The Poems Part of a Conversation? from “Pluralism and Its Discontents: The Case of Blacks and Jews,” by Cheryl Greenberg from Male Lust from Male Lust Lines That Didn’t Make The Cut: Ruth’s Story Commonplace Question #1: How Did You Become a Poet? The Ethics of Bearing Witness in Poetry to Violence and Trauma